A Letter to Smoke Alarm Manufacturers 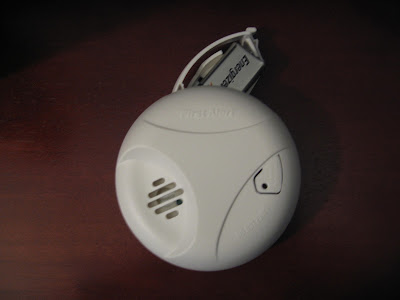 I would like to pass along a suggestion.  This suggestion could even set you apart from your competitor and help increase your sales if you implement it first.  My suggestion is: would you please design a smoke alarm that when the battery level gets low it only chirps between the hours of 8:00 AM and 9:00 PM.  For the past 30 years my smoke alarms only begin to do the low battery chirp usually between 1:00 and 4:00 AM.   Last night at 2:08 AM one of my First Alert smoke detectors began to chirp.  It woke me out of my sound sleep.  I was hoping it would not chirp again but then every five minutes…chirp…chirp.  I have five smoke alarms and one carbon monoxide alarm of which I try to change the batteries every year.  I even write the date that I install the new battery on masking tape and stick it on the back side of the detector.  Even with these efforts the low battery chirp seems to find me in my peaceful slumber usually about twice a year and usually on the coldest nights during the winter.  I really don’t enjoy leaving my warm comfy bed at 2:00 AM to stand in the middle of a cold room waiting for the next chirp to determine which smoke alarm I need to address.  Last night I picked the right alarm the first time and removed the battery but then I had a very hard time falling back to sleep.  Once I removed batteries from three different smoke alarms before I picked the right detector.

I do understand that this does not appear to be a problem for everyone.  For example my wife slept through this whole ordeal quite well, right next to me.  She never heard the chirping, never heard me get up, and never heard me drag the chair over so I could stand on it to reach the alarm.  But she is a member of the “sleep elite” who can sleep undisturbed by such noises as car alarms, passing trains, and police sirens.

If you were to implement this new design suggestion I would gladly pay one to maybe two dollars more per smoke alarm for this feature.  Think about that.  I believe you might be able to increase your bottom line by millions of dollars with this new design feature.  Let’s do the math.  I have six detectors in my home but let’s say each home has minimum of just three detectors.  According to the U.S. Census Bureau http://quickfacts.census.gov/qfd/states/00000.html there was 131,704,730 housing units in the United States in 2010. So 131,704,730 X 3 = 395,114,190 alarm units.  Now I understand that a number of homes are “hard wired” to the electrical system which do not require batteries.  So let’s just use some round numbers.  We’ll take a potential of 400 million smoke alarms and divide it in half to allow for hard wired systems and people who can sleep through air raids.  That leaves 200 million units in the U.S.   If you can charge one dollar more for this feature, which I think you can, then you have 200 million dollars to put in your bank account.  So please think about this and if you feel the need to pay me some sort of royalty for this suggestion then leave me a comment below and I will gladly give you instructions on where to send the funds.  Sweet Dreams….Peter
Posted by Unknown at 5:17 PM