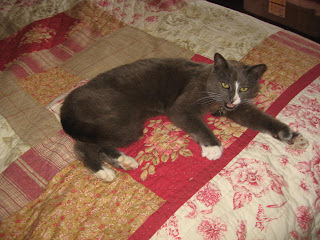 Lauren called me last night about 10:00 pm from Massachusetts and in a very excited voice said “Some woman has Dusty!” That was a shocker for both of us. It has been six weeks since we last saw Dusty and we had final come to accept that she wasn’t going to be in our life anymore. Boy she proved us wrong.

Sarah called Lauren after she was able to lure Dusty into her garage with a can of tuna fish and read the tag on her collar which fortunately remained around her neck. I called Sarah right back, got directions to her house and booked it over there. I couldn’t believe how far Dusty had travelled and I couldn’t believe she was still alive. Sarah and (Dave…I think) live over by Rabbit Road off of Route 26 which is four and a half miles from our house on the other side of town. They were so kind and concerned and were keeping a close eye on her until I arrived.

As soon as I went in their garage I picked her up and said “Dusty…where have you been?” in kitty talk and she immediately started purring. She hadn’t forgotten me. After thanking Dusty’s “Guardian Angels” we drove back home and Dusty chowed down a whole can of cat food. She remembers the house and me and I think she’s wondering where Lauren is. She’s lost some weight and feels boney. I don’t have a scale but I would guess she lost about 3 pounds and because I know she was only 10 pounds before she feels light at 7 pounds. She has a little patch of fur on her head that looks like it got scraped off somehow and is growing back. She has been SO “lovey-dovey” since she came back. She slept on me and tight against me all night long and every time she woke she would talk to me to be sure I was still there and I had to pat her and talk back before she would go back to sleep. She’s wiped out and has been sleeping most of today but every now and then when she wakes she rubs against me, jumps on my lap and relishes every pat I give her. I can tell she is really happy to be home and we’re really happy she made it. If she could only talk what a story she could probably tell us.