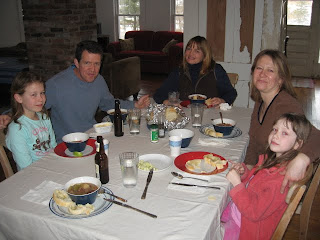 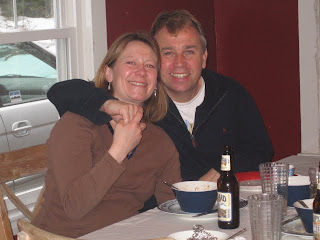 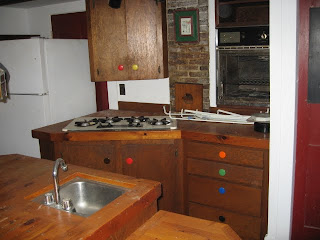 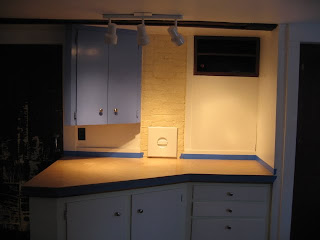 Today is our official 1 month celebration of living in this house and we have lots that we’ve accomplished. One big accomplishment was having our first dinner guests for a sit down meal. My sister Anna, Doug, and their daughters Helen and Ella came for a visit last Saturday and were our very first dinner guests. This is yet another example of how Desire Moves because Lauren had a strong vision of having family over for some homemade beef stew served in blue bowls and on red plates around a big table in the dining room here in Maine and… it happened! Lauren bought the bowls and plates at Crate and Barrel in California with a gift certificate that some of her friends had given her from work as a going away gift. Doug helped me bring in the dining room table from the barn to set it up and minutes later we were having our first meal. The beef stew was delicious as Lauren had the beef slow cooking in a Crock Pot from the night before and pre-roasted the vegetables before adding them in near the time of eating for a great texture and taste. Served with hot bread, butter and beer it was Delishio! Nice job Lauren.

We have been doing so many little projects that I’m starting to lose track of what was done. We’ve cut doors to make them fit better, primed and painted the kitchen ceiling, painted the bathroom floor, installed two new sets of accent lighting in the kitchen which required installing junction boxes and we put in a new countertop in one section of the kitchen to make it clean and workable. For the counter we used ¼ inch birch plywood and then put three coats of Good Stuff on it which makes it a food safe surface. Good Stuff is more like a paste then a poly-urethane so you apply it with a rag versus a brush. To be honest, I don’t know how this can be food safe because you need to have ventilation when you apply it, you’re supposed to avoid eye and skin contact and it ate through the fingertips of the latex glove I had on. The pictures above show how the kitchen looked when we bought the place and then how it looks now. We’re calling this temporary because we have plans (in our mind) to really re-do it nicely when we have the money (in our pocket).

I also started to cut some of the limbs on the pine trees in our yard which I’ll be cutting down to allow for more sunlight and it will also make the yard look bigger and our stone wall will be more noticeable. There’s also a fair amount of bamboo I have to get rid of. It’s not the nice tall bamboo that Panda Bears eat. It’s about 4 to 5 feet high and from everything we can tell and from everyone we’ve talked to this could be a real challenge.

Finally I need to talk about “noises in the night.” When we moved into the place we replaced and installed a bunch of new smoke alarms. To be exact five new smoke alarms and one carbon-monoxide alarm and they are all battery operated. About a week ago at 3:05 AM one of them went off. It only beeped once but it was loud and one beep was all I needed to bolt out of bed to see if the place is on fire. I couldn’t smell smoke or see flames upstairs so I ran down stairs and checked out all the rooms and the basement. Nothing, no smoke, no flames, just one loud beep. I chalked it up to weird smoke alarm behavior and eventually went back to sleep.

Three nights ago at 5:15 AM Lauren and I both woke up to this sort of high pitched squeaking sound. I jumped out of bed to try to figure it out. What was it and where is it coming from? At first it sounded to me like a bird had somehow gotten into the house and was now flying around frantically trying to get out. But as I searched around the sound had stopped and I was stumped. So I went to the bathroom, because I usually do that anyway once a night and heard the noise nearby again. With my flashlight in hand I aimed it at the noise just in time to see the tail end of a mouse scuttle under some boards in the floor. I told Lauren what our noise was and she laughed saying something like “Oh brother…. a raccoon, mud, and now a mouse. So first thing in the morning I went to Western Maine Supply and came back with eight mouse traps. I smeared peanut butter on all of them and set three in the basement, three near the area where I saw the mouse and two in the ell to the barn. I felt confident I would have one by the next morning but when I woke and checked all the traps, nothing. Mmmm?

Oh well… we went to Portland today and had lunch with Amber and Tommie and to give Amber “The Pickle” which is the green van we have borrowed from Lauren’s parents for the last two months to take back to Gloucester. Of course it was nice to see them…because it always is. We ate at Gilbert’s Chowder House having some seafood and chowder. Speaking only for myself I’ll give it 3.5 out of 5 Lobster Claws…Sorry Gilbert….the chowder was too cool to begin with and the clam cakes were…eh…okay but not great. Your waitress was very nice though.
We made it back home about 5:30 tonight and lo and behold… I got one. Sorry Mr. Mouse but the trap I had set pretty close to where I saw him was too much temptation. It must have snapped perfectly and then it fell eight feet down hitting the bathroom floor landing just one foot away from the toilet. Can you imagine….? Oh well, never mind. Here’s to one month of living in Bethel and more adventures! Thanks for checking in.
Posted by Unknown at 6:40 PM