Our First Weekend in Bethel as Homeowners 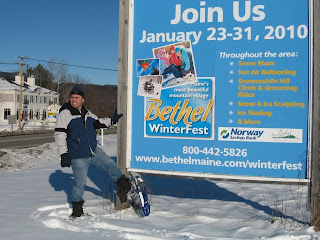 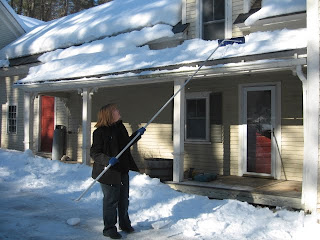 Okay we still don’t have heat in the house we recently bought but we were able to find a small place to rent for awhile in the neighboring town of Gilead. It’s clean, has a nice kitchen and bath and it has heat. Last night Lauren and I decided to try out the Mountain Explorer which is the local free bus that runs constantly between the downtown area of Bethel up to the Sunday River Ski Resort making several stops between at key hotels and restaurants. We got on at the Bethel Inn which is right across the street from the house we just bought and got off at the South Ridge stop at Sunday River. Once there we entered the main building and were greeted by throngs of skiers and snowboarders clomping down the hallways in their ski boots. It was just after sunset Friday afternoon and the place was hopping. We spent some time at the Foggy Goggle and had a drink while we watched the skiers coming down the mountain and ride back up on the Chondola. Everyone was clearly having a good time inside and out. We then hopped back on the Explorer back into town and got off at Suds Pub for some dinner and drink. While we were waiting for our food a couple from our old neighborhood in Gloucester, MA came walking in the door at Suds. Matt and Sari Rochford knew we had bought a house in Bethel because the grapevine is alive and strong in Gloucester. Matt’s dad Billy was one of my groomsmen when Lauren and I got married almost 29 years ago and Matt’s mom Arlene and my mother-in-law Joan “talk”. It was so nice to see them and it made us feel at home. In addition we met two other couples who live in York, Maine but own homes in Bethel. Lauren seemed to hit it off with the women and I was so glad to see her talk, laugh and smile. We really don’t know many people here and Lauren definitely needs some other people besides me to talk to.

Today we went to Western Maine Building Supply to buy a snow rake for the roof and some 2 x 6’s. It’s supposed to rain Monday and that will make the snow on the roof heavy so I needed to at least get some of it off the low pitched porch roof. Lauren looks pretty professional using that snow rake, doesn’t she? The 2 x 6’s I used to help prop up the barn roof. The barn is in very sad shape because not only has it been neglected but over the years different people or maybe just one cut out some key support members and it has been falling apart. I’m not sure I can save it because the closer I look the more OMG things I see. After this we decided to check out some of the festivities at the Bethel WinterFest which starts today and runs until the 31st of January. First we went to the Gazebo on the Common to view a few ice sculptures. They were very nice but not kid-proof because as we were leaving we heard a crash only to look back and see the one with bears had been knocked over by a two year old. Then we drove down to Festival Plaza by the Casablanca Movie Theater and tried out some snow shoes which I really enjoyed. After this we tried out the snow-maze which is only 4 feet high so really tough for kids but not so easy for 5 to 6 foot adults either. It was bright blue and sunny skies today and no wind so it felt great. So far, so good.
Posted by Unknown at 4:21 PM