A Late Afternoon in Andover, Maine 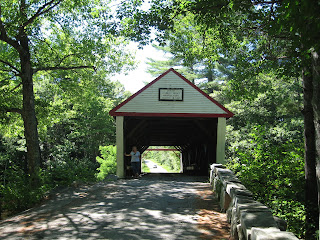 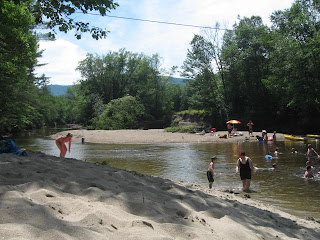 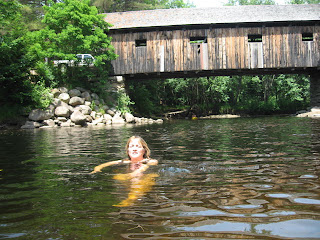 Wednesday I knocked off from working just after 5:00 pm and Lauren and I drove up to go swimming at the covered bridge in Andover, Maine. I guess technically, looking at the map it’s considered South Andover. It’s about 18 miles from our house and a beautiful ride though that valley that probably has a name but where the Ellis River serpentines its way south toward the Androscoggin River which it joins at Rumford Point. The Andover Covered Bridge which is also known as the Lovejoy Bridge was built in 1867. There is a plenty of perfect white “beach” sand on the east side of the river bank where you can plunk down your towel before you jump in for a swim. The water was cool and refreshing. The scene was… well…did you ever see an ugly wooden covered bridge? It was beautiful. We stayed for about an hour and then decided to drive over to a nearby lake which we heard was another good swimming spot. The lake apparently has three different names, Ellis Pond, Silver Lake, or Roxbury Pond, so take your pick. It was a beautiful lake with the sun getting ready to set beyond the tree covered hills on the west side, a couple of kayakers, a water skier, a few kids happily swimming from the dock of their family cabin, and multiple other conversations carrying over the still water of a peaceful summer late afternoon. Lauren did a solo swim at this lake which was quite a bit warmer than the Andover Bridge swimming hole.
We then continued to drive to the east side of the lake to check out the summer camps and cabins which eventually turned into a dirt road. Now I love dirt roads even though you shake, it’s loud and you stir up dust as you drive along. You really know you’re in the country when you are driving along a dirt road. Just before we crossed Garland Brook I spotted two Moose off in clearing maybe 100 yards away. We just stopped the car and watched them. They watched us… and after about 8 minutes of that they decided we were boring and headed into the woods. Naturally we forgot our camera which we seem to do a lot on occasions like this. The pictures above are from other times when we actually remembered our camera.
My plan was to take a road I saw on the map on the north side of the lake that heads back east toward Andover. It was 7:30 pm now beginning to get dark and I think Lauren was beginning to get nervous, out in the middle of nowhere… on a dirt road….with me. She took out The Maine Atlas and Gazetteer to check out my plan. Then she got technical on me and pointed out that the dirt road we’ve been shaking are brains around on for the last 15 minutes was considered a “Other Passable Road” according to the map legend and that the next road I was planning to take was called a “Unimproved Road”, and that the next thing below that would be called a “Trail”. So in a sign that I must be maturing in life I turned around and headed back in the direction we came.
We made it back to the center of Andover just before 8:00 pm and were hungry. Luckily we made it in time to eat at the General Store and Diner before they closed. What is the best way to end a day in Maine? How about a Lobster Roll on a toasted bun, with French fries and homemade Cole slaw for $7.99? Yes, we took two. Mmmm…Per-fect-O! So far this is the best tasting and best lobster roll deal I’ve come across. But we are not done as we seek to find more swimming holes and eat yet more lobster rolls. Thanks for stopping by. - Pete