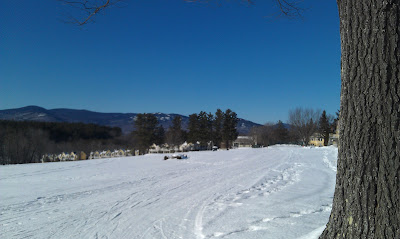 Dusty and I were looking out the window last night and I think we were both thinking the same thing….how much longer before we see green grass and feel some warm air?  We both like summer more than winter.  Of course 99% of most living beings probably do.
Making the best of the season I went cross country skiing yesterday.  It was actually very nice…bright sun, blue sky, and about 18 degrees which is cold but when your XC skiing you don’t feel it.  I met one other couple on the trail who both were skiing with classic old school wooden skis.  She inherited her skis from her mom and they were made of hickory. The hubby had upgraded his wood skis by installing the new style bindings on them. I wish I had taken a picture of them with their wooden skis.

The house project for this weekend was painting a small bookcase Lauren picked up at the dump.  We took off the backing which was crappy fiberboard and I cut a bunch of tongue and groove pine planks to replace it with which will be white whereas the rest of the case is grey. Lauren wants to put one more coat of grey on before I put it back together. By this weekend that project should be done.

Of course I watched our beloved New England Patriots lose to the New York Giants in the Super Bowl yesterday.  Sad for most us New England fans but I can hear the cheers from here of all the other team fans who just wanted New England to lose.  Yep I hear those San Diego Charger fans cheering for the loss.  Yeah, we lost the Super Bowl again but you know what, at least we got to play in it again and that means we have a great team. 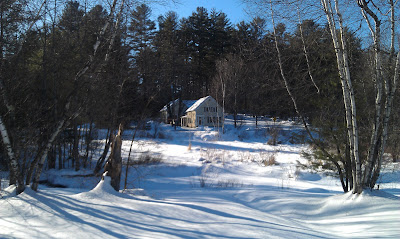