When we bought this house the steps were a mix of large uneven stones which caused you to step up higher than you normally would and they looked like this: 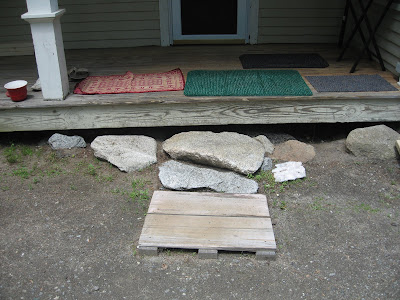 We knew we had some larger pieces of Granite on site which were sort of symmetrical and decided we could use one of them to make a new step for free. The challenge was how do you move it from where it is to where you want it when you don’t have a bucket loader or backhoe? The answer is you need the following tools:

A heavy duty wire cable with a hook on each end

Three steel pipes (all the same diameter is best)

* I just need to mention here under the Principle that Desire Moves that I did not have the steel pipes I needed, but I KNEW that I could get them for free somehow. Sure enough my Mind’s Eye led me to the pipes I needed at the dump just one day before this project. There they were, just waiting for me in perfect condition and with no cutting required. 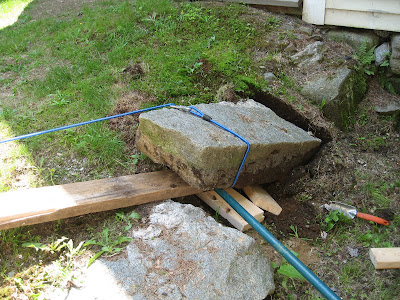 First assemble all the tools (excluding the beer) near the piece of granite. For those who have not had much experience using leverage you will learn fast. The longer your lever (crowbar) the easier you can lift heavy objects. Place a smaller stone or block about 4 to 5 inches high very close to the piece of granite and then put your crowbar between them getting the tip of the bar under the granite and then pull or push down on the smaller rock which is known as the fulcrum. Sorry if I’m sounding too technical here for such as Caveman job but I want to help educate fellow Cavemen and women when possible. 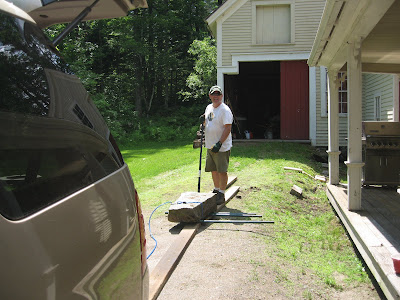 Once you get one end of the granite lifted have a helper (carefully) put some blocks under it and then wrap your cable around the granite and hook the other end to your car. If you have a trailer hitch good if not, attach it to the frame under the car. Next, lay one end of a wood plank under the granite and as the driver “very very slowly” moves forward, put the pipe pieces under the block of granite which will now roll along with such ease that you’ll feel like building a pyramid for your next project. As the last pipe rolls out the back of the granite block return it to the front. Turn the planks and the pipes in the direction you want it to go and with a little pushing or pulling she’ll make it to the destination. Our granite block was only 30 feet away from our step but we did have a small incline to get it over initially. It took Lauren and me less than 2 hours to complete the task start to finish and now we have a nice granite step for free. Oh yes, now it’s time for the beer. 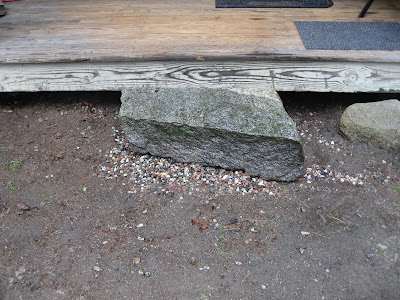