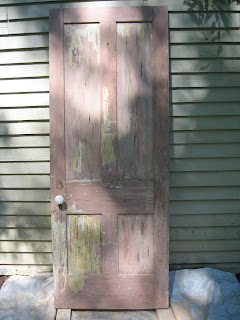 Recently we’ve been scraping and painting doors in our house. I actually love some of the doors in this house because they appear to have been so well built. The rails have tenons that fit perfectly into the chiseled mortises at the stiles of the door which are then pegged with wooden pins. They are solid and even though they show the wear and tear of everyday living over the many years they exude a sense of pride. I can imagine that patient carpenter or cabinetmaker working with a clear sense of purpose while building these doors, build it well, build it to last.

After scraping and sanding as much of the old paint off as I could they were ready to paint. One of the areas where “light has dawned on Marblehead” is that there really is a difference in paints. You would think I would have known this by now but I thought if you were paying $35.00 a gallon for Benjamin Moore “Premium” paint you were buying the good stuff. Wrong. Benjamin Moore has this paint for $50.00 a gallon which is the good stuff called “Aura” and despite the cost it is worth the extra $15.00 per gallon. We found that in the guest bedroom on the doors and trim it took one primer coat plus three “Premium” coats to fully cover the wood whereas I could get away with one primer coat and one “Aura” coat to fully cover this door. I guess the secret is better pigmentation and a higher percentage of solids in the paint which is the “stuff” that actually sticks to the surface. It sure does go on nice and spreads like butter. By the way, if you’re planning on painting in an area of higher humidity and wetness like a bathroom or laundry room Benjamin Moore has a special “Aura” Bath & Spa paint which provides a mildew resistant coating. 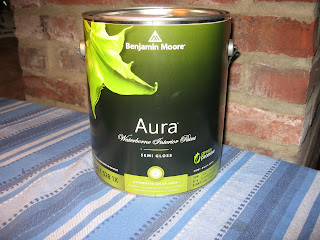 I would have guessed something nearer the coast like Plymouth, Salem or Ipswich but Dedham it is. Now that I heard about The Fairbanks House I’d really like to check it out. They have some really interesting photos on their website. If you have any experiences and opinions on good or bad paint please leave a comment. Thanks for stopping by.