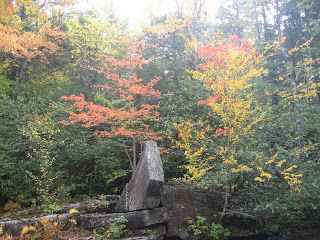 This past week there was a very noticeable change in the colors of the trees.  Saturday was a beautiful sunny warm day and although we had many house projects to do it was way too nice do to any of them.  Instead we did what any rational being should…we goofed off.  After we went to the transfer station we decided to explore the hills and some areas where we have not been yet and all I can is wow. Having been in California for the last five fall foliage seasons I have really missed this special time of year in New England which is so brief and so beautiful. It feels wonderful to be in the middle of it as each day more trees join the chorus of colors.  So here are a few pictures of the start of the season and we’ll see when she peaks. 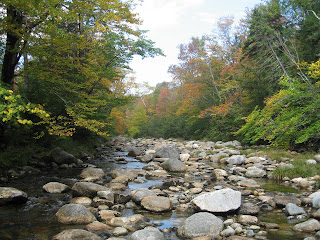 Later this day we were invited to dinner at our friend’s house who earlier had met a thru-hiker on the Appalachian Trail when she was walking her dog in Grafton Notch State Park and invited him to dinner also.  Greg Harris, with a trail name of “small-blue-dot” is from Austin, Texas and he started walking the Appalachian Trail at Springer Mountain, GA in April of this year.  I can’t remember if he said he left April 6th or 26th but either way he’s been walking for awhile.  He plans on reaching Mount Katahdin before October 15th when they apparently close Baxter State Park for overnight camping.  Greg was a very thoughtful person and it was a treat to for us to be in his company for a few hours.  We wish you safe travels on the rest of your journey Greg. 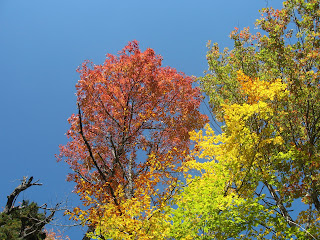