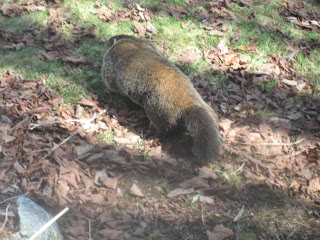 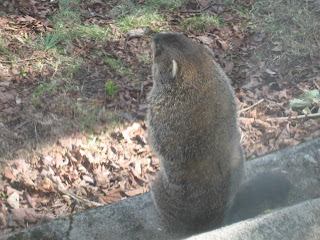 I’ve been thinking about planting a garden in the side yard ever since we bought this house in December. The main concern about having a garden for me was… would there be enough sun? About two weeks ago Lauren and I were eating lunch and I noticed this… movement next to the house by the barn. It started to head in our direction, so I grabbed the camera and told Lauren I thought was a beaver… but it didn’t have that beaver-type tail? We took these pictures of the critter, Lauren did some research and eventually identified it correctly as a Woodchuck, also known as a Groundhog,…. that’s right our own Punxsutawney Phil type character.
As I began to read about woodchucks I found out rather quickly that they are not a gardener’s best friend. They love vegetables and they can do a number on a garden in short order. This started to concern me about the success of any garden I might plant. One website showed me how to build something resembling Fort Knox under and around a garden. First you bury the wire fencing in the ground about 6 inches directly under the garden then come up all sides of it at least four feet high on posts where you then leave an additional two feet of fencing hanging loose so that if they do climb up the fence they cannot hang on to the floppy part and fall back to the ground. Hey, I just wanted to have a garden not a border patrol.
As we talk to people around here we instantly find there is a clear disdain for Woodchucks. We met a local guy just the other night who clearly loves life and has to be one of the seemingly happiest people I have met in a while. He was telling us how much he loved his ex-wife even though he just couldn’t get along with her. But once we mentioned the Woodchuck in our yard his reaction was quick and pointed as he raised his fist and said “Death to the Woodchuck." Earlier we had mentioned our woodchuck dilemma to someone who you may consider your grandmother, and she told us her solution was getting out her 22 and shooting it. She was not kidding.
It seems everyone here has a woodchuck story. When we attended a class last week on Organic Gardening (which was wonderful by the way) the speaker told us she uses the Hav-a-Hart trap and caught nine then relocated them before it seemed they were all gone. I don’t know…Wood it be easier to buy my veggies from the local farmer OR must I battle the Woodchuck?
Posted by Unknown at 7:01 PM