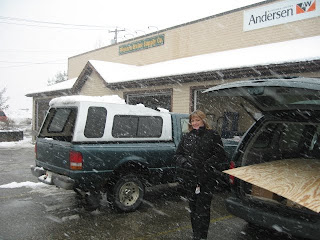 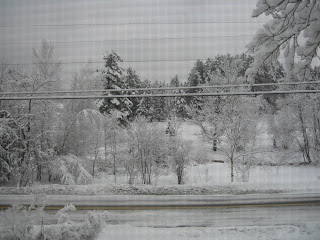 We did it! We moved into our house a week ago today and have had seven days of house projects and seven nights of warm comfortable sleep. Our biggest surprise and delight is just how warm this house is. We never turn the thermostats higher than 68 degrees and it always seems to be warm. In fact I think I probably made a $5,000 mistake by putting baseboard heat on the second floor because it has never come on until we finally forced it to come on last night for the first time. We’ll set the thermostat to 62 degrees at night on the first floor and the second floor seems to stay at 67 degrees with the rise of the heat. Oh well another lesson learned.
It was a busy week and although I can’t show you anything as impressive as a new heating system we did accomplish a lot of little things and that is what we “need” to do because this house has a thousand little things that need to be done. First we got our new FRIGIDAIRE Refrigerator delivered to the house. It has an EnergyStar approval and averages only $41 an year in cost, yay…go green! Because we bought it at Agren Appliance in South Paris, Maine we got a free DVD player and they’re taking care of the $100 rebate we receive. I have to side step here for one moment to acknowledge my memory of Annie Van Ness, Lauren’s Grandmother who always called any refrigerator, no matter what make, “the Frigidaire.”
Another important item we had installed was the Cable Internet and TV Service from Time Warner Cable because….well like everyone else in the US that’s the only choice we had. Oh yeah, I could get Satellite or I could string together some coffee cans and stick an aluminum pie plate on my roof. Whatever happened to free TV? Yes we have “choice”; Pay or… stay in the Dark Ages. I apologize, I digressed.
Let’s see, we got our bedroom set up and we have my office space functional. We found the curtains we were looking for so now we have curtains in the bedroom instead of a bedspread hanging over them. I replaced some old broken floor boards in the first floor bathroom and enclosed one of the two doors in it so we had sensible place to put “The Frigidaire” (yes, we put it on the other side of the bathroom). I replaced some of the old smoke alarms with new ones and installed an extra one. I insulated many of the gaps and cracks in the basement foundation with fiberglass insulation and GREAT STUFF Expanding Foam Insulation. When you can see daylight between some of the granite rocks you know you need to fill it. I removed the old stovetop and oven and will haul that to the dump later today.
Lauren is a cleaning and painting machine. There are multiple layers of dirt, grease, crud, and grime on every surface area in the house and armed with TSP and DAWN Liquid Detergent she is cleaning, scrubbing, re-cleaning and then painting. Until we can get to the point where we can actually remodel the kitchen and bath we’re just trying to get it to “clean and bearable”. She’s doing a great job. Lauren also seems to like going to the hardware store as much as I do. That’s a picture of her in front of Western Maine Supply taken yesterday just as the snow started to come in. I think she likes some of the recognition she gets from the guys coming into the store. Hey, if it puts a smile on her face…it’s okay.
It wasn’t all work and no play last week. Lauren had three of her longtime friends, Mary, Mona, and Cindy come up for a visit from Gloucester on Tuesday. I got to hang out with them that night where we had a nice supper and then went to Sud’s Pub for a drink and where Scott the bartender commented on my “Harem”. After that it was over to the Funky Red Barn where we played a game of pool and there were only two other guys there but Mary knew them because they were from Gloucester too. It’s a small world.
On Friday we went out to dinner with Susie and Gary who we had rented an apartment from in their house for the month we were here while waiting for our heat to be installed. We stayed a little more than a month so instead of charging us they said “take us out for dinner and we’ll call it even”. So we went to the Jolly Drayman at the Briar Lea Inn which is an English style Pub and had a wonderful dinner and wonderful time. Gary actually bought the Briar Lea years ago when it was just an old farmhouse and turned it into an Inn by installing ten bathrooms and a ton of other work so we now know a lot about the history and evolution of the place.
Well it’s Sunday and I’ve got work to do. I have to go to the dump for starters. The other picture above is the scene from our bedroom window this morning. Thanks for checking in and hope you are all well! Peter
Posted by Unknown at 7:25 AM