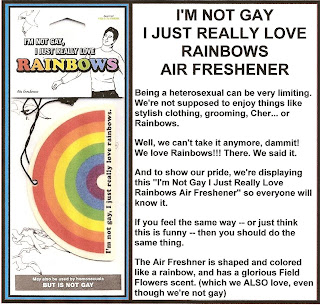 For years I have railed about the gay and lesbian community stealing the rainbow as “their” symbol. Who told them it was ok? They didn’t ask me or the State of Hawaii. I didn’t see a House Bill (H.R. Bill 6969) passed on this measure? As far as I can tell they just did a shout out on the gay grapevine and said “Hey, we're going to make the Rainbow our official symbol.” Excuse me Les Gays, I like rainbows too. Did you ever consider my relationship to the rainbow? The first time I took a prism in 7th grade science class and saw the rainbow display itself from a beam of white light I’ll admit I got excited but I didn’t feel the need to ask Randy over to dinner that night. Years went by and I was digging rainbows after a nice rainstorm in the late afternoon and then one day I noticed a rainbow flag. I thought to myself that’s cool. As time went on I began to notice more rainbow flags and even bumper stickers. At some point Light dawned on Marblehead and I came to realize that the rainbow had been absconded by the gay community. Well GLBT you can’t just come in and take the rainbow. That’s like Exxon/Mobil saying they own sunlight and now they’re going to charge us for it. It needs to be voted on. This is America and I want my voice heard. I also know I’m not alone. I just found this Rainbow Air Freshener and it makes a statement; “I’m not gay I just really love rainbows.” Now the only reason that this product even exists is because we all know you stole the rainbow. Don’t you remember your mother told you shouldn’t steal? Sorry GLBT folks but we just can’t continue to let this slip into common practice. Let America vote on it. Add another stripe or anything but please don’t take my rainbow. If you would like to order one of these Air Fresheners go to http://www.stupid.com/fun/IMNG.html As of today they are $4.99 each.
Posted by Unknown at 9:07 PM