A Day in San Juan Capistrano 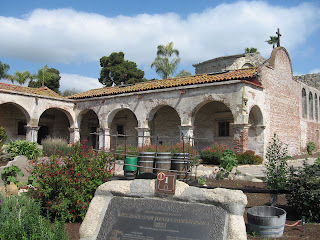 If reality TV show producers were filming a series called The Original Housewives of Orange County they would have to consider making it in San Juan Capistrano because Mission San Juan Capistrano is considered the Birthplace of Orange County and San Juan Capistrano has the distinction of being home to the oldest building in California still in use, a chapel built in 1782. But the Padres being who they are have no wives and so the producers would have to look for the next location.
Frank and Joan are my in-laws and are here for the month of March. The plan was to take the train to San Juan Capistrano and sight see last Thursday. This is a perfect day trip from San Diego. We had a late start catching the 12:34 pm Amtrak Surfliner train from Solano Beach and took the Business Class car north. My in-laws haven’t been on a train for quite some time so this was a treat for them and on most of this route you see the Pacific Ocean just yards away. In business class you get a package of snacks including cheese and crackers as well as a “free” small glass size bottle of wine.
The trip only took 45 minutes by train and as you begin to walk around you realize that this is a small town in Orange County. Our main objective was to see Mission San Juan Capistrano and it was an easy two block walk from the train station. The Mission is probably best known to me and many others for the annual "Return of the Swallows" which is traditionally observed every March 19th. It’s funny because the following day as I was working on the dock in Mission Bay and I noticed a few groupings of perhaps a hundred swallows flying and swooping in formation northward. I felt the connection to nature because here it was March 13th and the swallows are doing their thing just like they’re supposed to. I’d venture to say most people in the area didn’t notice them at all, but I did and I knew where they were going. There were two different groups at about one hour apart and I noticed they both made the exact up and down move in the exact up and down space over the bay. It was as if they were following a very detailed and specific flight path that only they could see and that is probably true. The Mission was founded on November 1, 1776 and if you love history and want to get a true sense of early California this is a must see. It’s a peaceful location where you get a real sense of what it was like to be there during its early days.
Near the end of our Mission tour, Lauren and Joan decided to head out early and walk to the newer Basilica just down the street. As I was taking a few more pictures about 25 yards away they said something about staying with Frank and I thought I heard him say he would be right outside the gate waiting for me. Because they often all talk at the same time I heard something like; wha, wha, wait, wah, Frank, gate, wha, wha, church, okay? I said okay. After taking a few more photos I returned my audio tour guide gizmo and proceeded to the exit. I didn’t see Frank standing there like I assumed but it was sunny so I looked across the street to where the shops had covered sidewalks. Still no Frankie. Hmmm…did he walk around the corner a bit which happened to be curved, so slightly blind? Walking, walking, still no Frankie. Frank has had knee replacements and doesn’t move as fast or far as my mother in law, so I’m judging in my mind that he shouldn’t be this far down the street. At this point I’m at the Basilica so I run in to check. Awesome alter, peaceful music, and a few souls engaged in prayer. Nobody I knew though, so I took a photo and went out the back door to loop back towards the center of town. Across the street I spotted Lauren and Joan window shopping. Walking up behind them I contemplated….do I tell them I’ve lost Frank or walk behind the buildings and continue my search? Take it like man Pete.
Me: Boo!
Lauren: Where’s Frank?
Me: I lost him.
Lauren: You what?
Joan: Oh, he’ll be fine.
After the appropriate butt-chewing I walked a little faster down the sidewalk. It wasn’t crowded so he should be easy to spot. My mind said he may have popped in to one of the local drinking establishments for a beer, so I’m scanning for this type of business as I walk. About four minutes later Lauren called to say “she” had found her father back inside the walls of the Mission dutifully sitting and waiting for me to pick him up. Sorry Frankie, I’m just adding to the chapters of stories that can be told mostly by Lauren who never forgets any of them.
Before catching the train back we had a bite to eat at Sarducci’s restaurant which is right next to the train station and apparently was the train station at one time. The food, the atmosphere, the service, and the price were all good. The bathroom was located in a converted boxcar and I thought the architecture was interesting however the urinals in the men’s room were too close to each other and to the wall of the toilet.
After visiting the Rios Historic District across the street and with everyone accounted for we caught the train ride back in time to catch the sunset in Del Mar.
Posted by Unknown at 3:08 PM