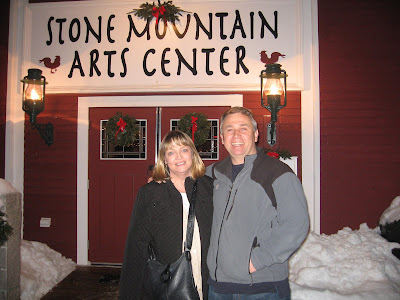 When I was young the term “I got lucky” had a whole different connotation and now when I say “I got lucky” I mean something like …I just won a pair of free tickets to see and hear some cool music in a really neat place…which is exactly what happened to me last week. You see I entered this contest on a radio station I like here in Maine known as WCLZ and about a week later they emailed me to say I had won a pair of tickets to see Carol Noonan at the Stone Mountain Arts Center in Brownfield, Maine for January 20th. This really was a prize because Lauren and I have been talking about going to this place for the past 12 months. If you check out their website you will see why http://www.stonemountainartscenter.com/ArtsCenter/ .
What they do is they bring in amazing musicians and entertainers with some pretty well known names like Joan Baez, Robert Cray, and The Indigo Girls to a “beautiful- new” post and beam barn structure located out in the middle of nowhere to entertain you, me, and the locals. There was such a nice vibe at this place that words cannot explain it. The box office lobby is a “beautiful-old” post and beam barn that they had moved just a short distance on the site and rebuilt. The bartender was one of the people who helped to rebuild the lobby barn which brings me to another point. You really sense “community and love” here, from the people who work at multiple tasks, to the songs you hear, and from Carol’s desire to give back to the community. In fact this event was labeled as The Album Release for Waltzing’s for Dreamers by Carol Noonan who notes that the sale proceeds will be used to “To put on some free shows for our recession hard-hit community…”

Before I end let me say you can eat here before the show at the same table where you will then experience the show and the food is good and plenty. We had a delicious large salad with fruits, nuts, and cheese which we split and still brought home half. I then had the salmon chowder loaded with chunks of fish and other goodies which came in a bowl the size of a small bathtub. Okay I exaggerated here but not by much, you’ll see and yes I took at least half of that home too.

Carol Noonan and the Stone Mountain Band is so worth seeing if you can create the opportunity and I think you will feel lucky when you arrive at the Stone Mountain Arts Center even if you have to pay for the tickets
Posted by Unknown at 2:30 PM