The Big Butt Van: Bringing Neighbors Together One Last Time 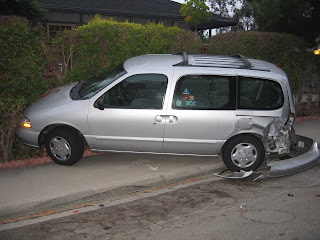 Well there it is…the Big Butt Van mortally wounded, ready to exit our lives. She’s been a good van, a classic soccer mom van, a workhorse performing all sorts of hauling expeditions. Hauling Kayaks all over New England, kids to soccer games and cross country meets, work mates to Fenway Park, Amber’s stuff to and from Wheaton College each year and multiple furniture moves in San Diego. But at 5:15 am on October 10th her number came up. A driver who one may “presume” was DUI smashed the rear corner pushing it up over the curb of the sidewalk and plowing it into our neighbor’s bushes. As quickly as they hit it they managed to regain their bearings and take off before anyone had a chance to see their car.
Although the bang woke me up I didn’t recognize it as a crash like our neighbors above us did and who knocked on our door two minutes later and said “Pete…Lauren’s car was just hit and it’s bad.” After a quick survey we called 911 and our insurance company to get the ball rolling. The police officer who came out to inspect it was very nice. His name was Officer Troy Gess and my wife would best describe him as a “cutie-pa-tootie”. So naturally at the end of his investigation when he asked if we had any other questions, Lauren asked if he had any friends like him for her 22 year old daughter? She had already found out Troy was married.
As the sun began to brighten up the day and we waited for the tow truck to arrive neighbors began to appear. Many of these neighbors we have never met or said more than a passing hello during the 14 months we have lived here. Lauren was beginning to enjoy it. Meeting the neighbors. Friendly conversation. We first officially met Robert (and later his girlfriend Maya) who as a postman was leaving early for work but stopped to tell us he may have some video surveillance from his house to the street. That might be handy. We then met Erica and Alex and some of their kids. She’s from Barnstable, MA so she and Lauren could exchange some Mass stories. We met David who I think is retired and may be the longest living resident on the street. He was here before the street was paved and before it extended down the hill or what was a canyon. We spoke to Cathy and John who we had spoken to before. Occasionally we see John come out in a kilt with a set of bagpipes to play at some event. I met Rob and Becca and their two young kids. They’re Birders and were curious what the Mass Audubon sticker on the van was all about with its Kingfisher or Tern logo. We talked again to Danny, Ryan and Christine, a young group renting the house next door and sort of like a Three’s Company in reverse. Danny and Ryan both sell shoes at Niemen-Marcus; I’m not sure what Christine does. We met Gloria a talkative neighbor a few doors up who now works full time as a pet-sitter. She used to work for AT&T until that world changed. She also happens to be house watching for Jose and Nancy who own the house next door which was the ending spot for the front end of the van as it sat not-so-gracefully lodged in their front bushes. They happen to be in Spain for a while. I think the final neighbor we met was Christy who I would say slept late and was calling the police around 11:00 AM to report a car in the neighbor’s bushes. Her dad use to play for the Baltimore Orioles.
The moral of the story should be obvious…if you want to meet your neighbors plan something dramatic to happen in your neighborhood. It’s a guarantee they’ll come out and say hello.
Posted by Unknown at 11:03 AM