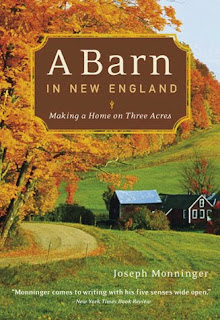 Every now and then I read a book that draws me in deep. A Barn in New England has done just that. It put me right at the location and the experiences that author Joseph Monninger writes about. From the very first moment he and Wendy view the barn in the dead of a snowy winter day, where I could smell the cold, to the longer summer days and nights of installing a fence, planting gardens and renovating the barn with insulation, new beams, and a new kitchen I felt as if I was right there, helping with all of these tasks. To be honest the reason it was so easy for me to relate to this story is because Lauren and I have been talking and dreaming about doing something quite similar in nearby Maine. We’ve looked at a number of houses over the past two years with barns and haven’t quite figured out how to make it all work but we are still trying. Lauren gave this book to me as a Father’s Day gift and it has proved to be one of my all time favorites.

Being in an old Post and Beam Barn to me is perhaps what many feel when they step into a church. It’s a spiritual experience, Nirvana. One of my first experiences as a 7 to 10 year old was visiting the horse barn of the Ames Estate in North Easton, MA where I would bring my bike to the caretaker Paul Simmons who would fix my broken chain or flat tire. I can still conjure up the smell of the hay, the wood and the leather from the tack shop. It was so quiet and peaceful. With the nearby tall mature shade trees it was also nice and cool on a hot summer day.

A few years later my family moved to Lakeville, MA and I was lucky enough to get a job during the summer as a 12 to 13 year old working on Wilkes Dairy Farm earning $1.30 an hour. My job was to weed the vegetable garden and sometimes feed the cows in the barn when they came in for milking but my favorite job was haying. Picking up bales of hay in the field which weighed probably between 40 and 80 pounds depending on moisture content and where they were cut and throwing them up to another person on a flatbed truck as it rolled slowly up and down the field. The higher the stack of hay got on the truck the higher I would have to throw that bale. Boy did I build some muscle back then. The afternoons were usually sunny, hot and humid so we would sweat hard and the chafe from the hay would stick to our sweaty arms, face, and neck. Then we had to take the truck to the barn and unload the bales in the hayloft. Like an attic the hayloft was often hot as you stagger stacked the bales so they would tie in together much like cinder blocks. At the end of an exhausting day it was down to the coolest part of the barn in the shade where we would chomp on big juicy pieces of pink watermelon where the juice would run down your chin, chest, and on to your arms. I was one sweaty, dirty, juicy and tired farmhand but it felt so…oh good.

In my late teens I rented a house near Freedom, Maine where a local neighbor raised chickens and ducks on a commercial scale. Big three story barns with a thousand chickens and lots of chicken shit and wood shavings to clean out once the chickens were hauled off to market. As you can imagine it could be considered a nasty job but with a dust mask and appropriately timed breaks to drink Old Milwaukee beer we seemed to happily get the job done in amazingly quick fashion.
So perhaps because of my fond memories of the smells and good feelings found in a good old barn I long to have one now of my very own. One I can bang a big nail in the beam and not feel like I am doing damage to anything. One where I can hang my poster of Farrah Fawcett (may you rest in peace, Farrah) that Amber and Tommie gave to me as a birthday gift a few years ago because they knew I wanted one for my barn dream. One where I can have my own workshop and build things out of wood; guitars, furniture, anything I want. One where I can invite friends and family over and drink Old Milwaukee beer. One where I can find Nirvana.
Posted by Unknown at 3:32 PM